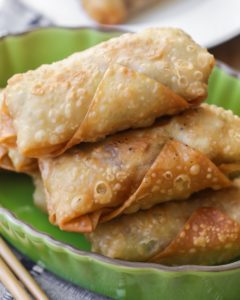 The Chinese have been well-known for their egg rolls over the years. However, these egg rolls are special. My son-in-law’s family fled China in the late ’30s because of WW2 when the Japanese invaded. They fled to the Philippines and shortly after the Japanese invaded that country also. Melvin’s family feared persecution and annihilation so they moved to the mountains where they lived for many years. In the ’70s his parents moved to the U.S.A and this is where Melvin was born.

So what makes these egg rolls different? It is the wrapper, which is very similar to the Filipino lumpia. Their filling and dipping sauce is most defiantly Chinese in origin. You’ll enjoy the crisp crunch of the wrapper and the delicious filling with Asian flavors.