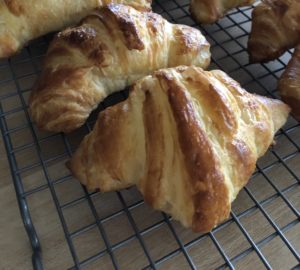 This French style butter croissant recipe is layers of buttery goodness, with a lofty dough that flakes, crunches and makes a down right mess! I plan to make chocolate and almond croissants with my day old ones, if there are any.  The butter croissant is a French viennoiserie pastry of Austrian origin, named for its historical crescent shape. They made it in a crescent moon shape which was the symbol on the Ottoman flag. It was to remind everyone of their victory over the Ottoman Turks.

Don’t put off making this delicious pastry. You will not regret eating these croissants. Learn from the French, L’appétit vient en mangeant, appetite comes with eating!

1 3/4 cups (1/2 lb.) all-purpose flour. This is important to measure correctly. Measure by scooping a dry measure cup into flour and leveling off with a knife.

Mixing and kneading the dough:

Mix the yeast in the tepid water with the sugar, and let liquefy completely while measuring the flour into a fairly straight sided 3 quart bowl, with the salt; also warm the milk to about 100 degrees. Then blend the milk, oil, and dissolved yeast into flour with a rubber spatula, cut time and pressing to be sure all elements are blended. Turn out to kneading surface and let rest 2 to 3 minutes while you wash the bowl. Dough will be soft and sticky a lot like the sourdough no-knead dough. Start kneading by lifting near edge, using a bench scraper; flip it over onto the other side. Rapidly repeat the movement from one side to the other and end over end 8 to 10 times until dough feels smooth and just begins to draw back into shape when pushed out. Do not knead any more than this or you will over-activate the gluten and have difficulty rolling out the dough later.

In the cleaned bowl put 7 cups of  tepid water, make a mark on the outside, empty out the water and dry the bowl. Scoop the dough into the bowl, cover with plastic wrap and towel, and place at a temperature of not more than 75 degrees.

**Delaying tactics. You may wish to complete the second rise in the refrigerator overnight, covering  dough with a plate and a heavy weight to prevent over-rising. You may freeze the dough at the end of either rise.

The second rising: Dough is to have 2 long, slow, cool rises to develop its natural taste and texture. During the first it should more than triple in volume, reaching the 7 cup mark on the bowl, and should take a minimum of 3 hours-refrigerate once in a while if dough rises too fast in a warm room. After the firs rise, turn dough out onto work surface, pat into a rectangle about 12 inches long, fold in three as though folding a business letter, and return to bowl. Cover and let rise again at around 75 degrees, this time to double its volume 1 1/2 to 2 hours. Then turn out onto a floured plate, cover , and chili 30 minutes before proceeding.

Rolling the butter into the dough: Dough is now to be spread with butter, folded, rolled out, folded again 4 times in all to build up layers of butter between layers of dough.

Beat the cold butter with a rolling pin to soften; smear out with the heel of your hand, gather up, smear out again rapidly, until butter is easily spreadable but still cold. Plan cold Doug on a lightly floured surface; push and pat and lightly roll it our into a rentable about 14 x 8 inches. Spread the butter as evenly as possible over 2/3 the length of the dough, leaving a 1/4 niche unbuttered border all around. Fold the unbuttered third up to the middle, then fold the buttered remainder down over it, as though folding a business later. This is the first turn.

The second turn, lightly flour the dough, rotate it so top flap is to your right, as though it were a book, and rapidly roll it our into a rectangle about 10 by 16 inches. Fold into 3 before, flour lightly, wrap in plastic, and refrigerate. Dough must now rest al least 45 minutes to de-activate the gluten and firm the butter. To prevent it from rising, weight it down with a plate or a cutting board topped with a weight, a can of food, for instance.

(Dough can be refrigerated overnight at this point if well weighted down, or it may be frozen.)

For the third and fourth turns, if dough has been thoroughly chilled, beat back and forth and up and down with the rolling pin to break up congealed butter. Roll again into a rectangle and fold in 3 for the third turn; repeat the process for the fourth and final turn. Wrap and chill 2 hours were forming into croissants.

(Of weight the dough down, in the refrigerator, where it will keep 2 to 3 days.)

Roll remaining pieces into a 5 1/2 inch square, and cut on the diagonal into 2 triangles. Lengthen one triangle to 7 inches, rolling it out with your rolling pin; stretch the bae an inch, pulling the two ends with your fingers.

Finally, holding point of triangle with one hand, will up from base to point with the hand.

Bend the two ends down to form a crescent shape, and place on a buttered baking sheet, point of former triangle resting inside the curve of the crescent. Form rest of Dough in the same manner.

(Formed croissants may be covered airtight and frozen for a week or so and this point.)

Final rise before baking:Cover loosely with floured towel; set at around 75 degrees. Dough should almost triple in size, and look and feel light and puffy. It is the final rise that make the croissants light and airy. Time: 1 1/2 hours or more. Preheat oven to 475 degrees in time for next step.

Baking: Oven set at 475 degrees. Just before baking, paint the croissants with egg glaze. Set in middle level of preheated oven for 12 to 15 minutes, until nicely puffed and brown. Cool 10 to 15 minutes on a rack before serving.

To keep baked croissants, freeze them as soon as they are cool; unwrap and set on a parchment sheet in a 400 degree oven for 5 minutes to thaw and warm through before serving.