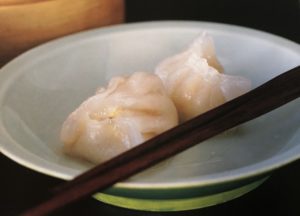 The classic har gau dumplings are one of the favorite in the collection of Chinese dim sum.  They are small, pleated, rounded crescents that always filled with shrimp. They are only made in one way, with one dough, and cannot be made with ready-made wrappers.  These dumplings have been made essentially the same for centuries.

The skin must be thin and translucent, yet be sturdy enough not to break when picked up with chopsticks. The shrimp must be cooked well, but not overcooked. The amount of meat should be generous, yet not so much that it cannot be eaten in one bite. Recipe adapted from Eileen Yin-Fei Lo’s

You will not be disappointed by the flavor or ease of making this delectable dumplings. Watch this video and see what a delight they are to make and how little skill it takes.

n a small pot, bring the water to a boil over high heat.  Add the pork fat, cover, leaving the lid slightly cracked, and keep the water at a boil. Cook the oil for 30 minutes. Turn off the heat, remove the fat to a bowl, run cold water over it, and let stand for servers minutes until cool. Remove the fat, pat dry, and cut into ⅛ dice.

Place the shrimp in the bowl of a stand mixer fitted with the paddle attachment.  Turn on the mixer to low speed and add the following ingredients, one at a time, in order, mixing well after each addition: salt, sugar, egg white, tapioca starch, oyster sauce, sesame oil, and white pepper.  Then add the diced pork fat, water chestnuts, scallions, and bamboo shoots and continue mixing until the ingredients are thoroughly blended.  Stop the mixer, transfer the shrimp mixture to a shallow dish, cover and refrigerate for at least 4 hours or up to overnight.

Dough: Rinse and dry the bowl of the mixer and return it to the stand.  Plan the wheat starch, tapioca starch, and salt in the bowl. Fit the mixture with a dough hook and turn the speed to medium while slowly adding the boiling water.  Then add the peanut oil and beat until the mixture comes together as a dough and forms a ball.  If the dough is too dry, add 1 additional teaspoon boiling water. Stop the mixer, remove the dough from the bowl, and knead it several times on a clean work surface until it forms a cohesive dough.  Divide into 4 equal pieces, and cover with plastic wrap so its moisture is retained.

Oil the work surface. Then soak a paper towel with peanut oil and run a cleaver blade across it a few times to oil the blade well.  Remove 1  piece of dough from plastic and place it on the oiled work surface . Using your palms, roll it into a log 8 inch long and 1 inch in diameter. Cut the log crosswise into ½ inch pieces.  Work with 1 piece at a time and keep the others covered with plastic wrap.  Roll the piece into a small ball, then press down with your palm to flatten it.  Using a flat side of the oiled cleaver blade, press down on the dough to the right, then reverse back left to create a thin round 2½ inches in diameter. Repeat with the remaining ½ inch pieces and then with the remaining dough in the bags, oiling the cleaver blade as needed to prevent sticking.  Make 4 rounds at a time, then form 4 dumplings, keeping remaining dough pieces covered with plastic wrap to prevent then from drying out.

Place 1 round on the palm of one hand, place 1½ teaspoons of the filling in the center of each round, pressing slightly to flatten, and then fold the wrapper in half to create a half-moon.  Holding the filled dumpling securely in one hand, form about 5 small pleats along one side of the open edge with the finger of the other had pressing the pleats again the other edge to seal the dumpling closed.  Then tap the rounded, folded edge lightly with a knuckle to give the dumplings its final shape. Repeat until all the filling is used up.

Oil 3 bamboo steamers.  As you make the dumplings, place the first one-third of them in a prepared bamboo steamer, making certain they do not touch one another or they will stick together.  Cover the steamer and steam for 7 minutes, or until the dough is translucent and the filling is visible through it. As the first batch steams, prepare the second one-third dumplings, place in another steamer them steam that batch when the first one is done.  Repeat with the third and final batch.

Serve dumplings hot straight from the steamer. Accompany with a mustard condiment.