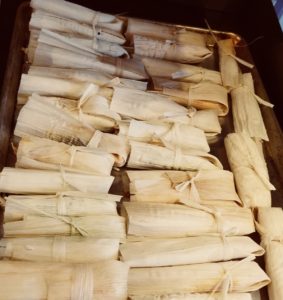 Authentic Mexican Tamales are a culinary treat. Traditionally they are served at Christmas or special events like weddings. Don’t let these authentic Mexican tamales scare you, I have an easy to follow technique that will be full proof. Use your imagination to stuff the Mexican Tamales with your favorite flavor or cheese. With a little planning, you can have this traditional treat at hand. Start the tamales the night before, setting the husks to soak overnight. The next day, mix the masa marina with some chicken stock, lard, salt and baking powder. Lay the mixture onto the husks along with shredded meat, wrap and steam them on a rack. It’s a perfect project for the intermediate home cook, hoping to broaden a skill set. Top with your favorite sauce, red chili  for beef and pork or chili verde  for chicken and veggies.

*Store bought roasted chicken will suffice, if you are pinched for time. Season with oregano after shredding.

Clean and season chicken with all the ingredients. Place in a baking pan and roast on 425 degrees for 1 to 1 1/2 hours until it reaches I70 degrees internally. When it has cooled shred the chicken. Set aside to cool to room temperature.

Place 1 pound of lard in a large stand mixer and mix until fluffy, scraping sides so the lard stays in the center of the mixing bowl.

Add baking powder and the salt to the lard and mix together again until fluffy.

Add the masa a bit at a time and mix together, slowly add the broth and 1/2 cup of the chile verde sauce, if using, to the masa and mix until combined. The mixture should be about the consistency of smooth peanut butter. Add more broth as necessary. Test the masa by taking a small piece (1/2 teaspoon) and dropping it into a cup of warm water. If it floats it is ready; if it sinks, add a little more lard, beat for another minute and test it again. Repeat this process until the masa floats. Pour the masa mixture into a bigger bowl.

Cover the masa and set aside while you prepare your filling of choice.

Soak corn husks in water for an hour before using, rinse well with running water to take off any dust or corn husk fibers. To keep corn husks pliable and easy to work with, keep in water while filling tamales. Place a handful of wet corn husks in a colander to drain before using.

Take a drained corn husk and place the wide end of the husk on the palm of your hand, narrow end is at the top. Starting at the left side of the husk spread 2 tablespoons or more of the masa with the back of a spoon in a rectangle or oval shape, using a downward motion towards the wide-bottom edge. It should measure 3-4 inches across and 5-6 inches from the top of the husk depending on the size of the husk.

Spoon 1½ tablespoons of your chosen filling down the center of the masa. Fold the left side over onto itself to the edge of the masa on the right and roll; finish off by bringing the pointed end of the husk toward the filled end. Make sure it’s a snug closure so the tamale will not open during steaming. Secure by tying a thin strip of corn husk around the tamale. This will keep the tamale from unwrapping during the steaming process, especially if the husk is too thick and will not stay folded.

Use a deep pot with a strainer or tamale steamer to steam tamales.  Place tamales upright, with fold against the sides of the other tamale to keep them from unfolding. You can also tie with a string 4 to 5 together and then stack in the pot. Cover pot with a tightly fitting lid. Set heat on high and bring to a boil. Lower heat and simmer for 1-1½ hours. Keep lid on tightly. To test if done, put one tamale on a plate and take off the corn husk. If it comes off without sticking to the husk they are done.

One thought on "Authentic Mexican Tamales"