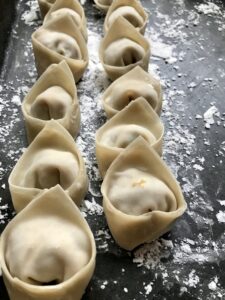 I dream of this Chinese Wonton Soup recipe almost every week. This addictive soup is simple to make and very rewarding. These tasty little dumplings are believed to have been introduced to the West by early Chinatown settlers from Canton, Southern China. Wonton literally means “swallowing clouds” in Chinese. You can make the wontons ahead of time and freeze them on a baking sheet. Make the broth a head of time and freeze it also for the wonton soup or other nourishing meals.

Wontons can be filled with a variety of flavors, however I choose to go with the traditional style.
Print Recipe
Total Time 30 mins
Course Appetizer, Main Course
Cuisine Asian
Servings 4 servings

Additions for preparing and serving