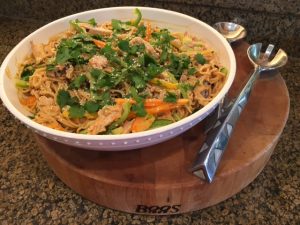 Drunken peanut chicken satay salad recipe is easy to make.  Kids enjoy the flavor and gobble it up, adults feel it’s sophisticated and exotic.  Great summer dish when it’s hot in the house and you don’t want to make it hotter!  Try placing it on a bed of lettuce for a healthy refreshing addition. See my other asian salad options here.

Combine all sauce ingredients in a bowl. If it is to thick add more coconut milk. Consistency should be thin enough to cover the pasta without clumping it together, but not to thin making it like a sauce.

Preheat oven to 400 degrees. Salt and pepper chicken breast, drizzle olive oil over and bake until done approximately 25 minutes. When they reach internal temperature of 165 degrees remove them from the oven. Allow them to rest and cool for 1 hour.

While the chicken is roasting start cooking the pasta and cook until al dente. When it is done drain and run cold water over the pasta to remove the starch. Set aside.

After chicken is cooled shred the breast. Once shredded add the juice from the cooking pan and pour over the chicken to season and moisten the pieces.

Slice the peppers into thinly slice strips, as well as the cucumber. Set aside and roughly chop the cilantro.

To prepare the salad take half the sauce and pour it over the drained pasta, mix thoroughly. When the pasta is coated add the shredded chicken, peppers, cucumbers and remaining sauce. Mix again until fully incorporated. Place into a large bowl and top with cilantro and sesame seeds. Serve