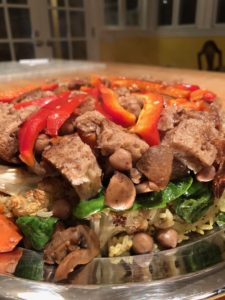 Maqluba vegetarian recipe has all the flavor without the meat.  In the middle east Maqluba with meat  is comfort food.  It is also the most requested dish around the Arab table. A layered dish of chicken, eggplant, cauliflower, spices and seasoned rice that is flipped upside down at the end.

Maqluba vegetarian recipe is made without meat, but you will not sacrifice any flavor. This recipe is usually made with fried vegetables, but we are going to roast them in the oven with olive oil for a healthier version. We also replace the meat with mushrooms and beans that give a hearty texture and flavor.  Once it cooks you flip in over and the result is a layered stack of yummy!

This is an impressive dish that will give the wow effect at dinner time.

Cut the eggplant and the cauliflower and place them onto a parchment lined sheet.  Be sure not the crowd them.  Drizzle generously with olive oil and sprinkle with kosher salt.  Roast at 450 degrees for 30-45 minutes until they are browned and soft, set aside.

Slice the portobello mushrooms into thick slices to resemble meat and dice the 2 onions. Heat some olive oil in a large pan, add the onions and mushrooms. Sprinkle with salt to remove their liquid and cause them to brown.  Cook until the onions are translucent and the mushrooms have browned. Add the garbanzo beans, sliced carrots, 1/4 cup cilantro and spices. Stir until blended and cook for a 1 minute.  Cover with water and cook until everything has softened and flavors have melded together.

Take the pine nuts and fry them in some olive oil until the have slightly browned.  Be careful they brown fast. Set aside.

Cook the rice with salt, curry spice and 1/4 cup chopped cilantro. When it has cooked fluff with a fork and place it into a bowl. Set aside.

Now it is time to layer the dish.  In a 4 to 5 quart pan, use non stick spray to coat the pan. Lay the red peppers into a circular design, sprinkle the bread cubes over the top of the peppers. Put a layer of cauliflower on and a layer of eggplant next. Scoop the beans and mushrooms out of the pan they were cooked in and place over the eggplant, making sure the liquid remains behind for the end.  Scatter the spinach leaves and another layer of eggplant. Now end with the rice filling it over the eggplant. With the remaining liquid from the bean and mushrooms pour over the rice distributing it around the surface. Place on the stove top for 30 minutes on medium heat.

Remove from the heat and allow the pot to sit for 5 minutes before flipping over.

To serve, uncover the pot and invert a platter over it.  Holding the two together, flip the pot over onto the platter.  Do not remove the pot for a few minutes.  When you are ready to remove tap on the bottom of the pan and gently remove the pan.  If the peppers stick just remove them and place on the top.   Sprinkle with the pine nuts and serve.